Over the last three weeks, Arctic ice area has declined by 662,000 km², which is 60% of normal and the slowest on record.

Slow ice melt means more ice choke-points to navigate - many specific locations have been near impossible to even try with 90% ice concentrations. In 2013 there has been a 55% INCREASE IN ARCTIC ICE SINCE THIS DATE LAST YEAR.

This has been caused by the coldest Arctic summer on record.

Basically the summer melt season has been the slowest on record... there are more pronounced ice 'choke-points' for vessels attempting a NW Passage than in recorded history... seven vessels have been waiting around Lancaster Sound unable to navigate south nor west while other vessels in the Western Arctic have been delayed in reaching Cambridge Bay from ice in Amundsen Gulf. Westerly winds have also pushed the Beaufort Sea ice up tight against Banks Island. The 2013 ice season is nothing like the 2012 ice season - a black & white (blue & white..lol) difference. 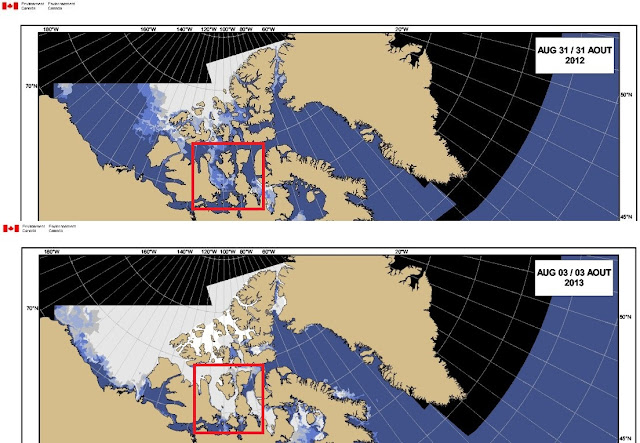 Bottom line - "if" and "when" the ice melts "enough" to allow open navigation by small yachts - will there be enough of the summer ice melt season remaining - or put another way - when will Mother Nature close the door and the sea freeze over closing the door from anyone exiting the Arctic in 2013... it appears that slower "sailing" boats are at risk of being trapped in the Arctic - turning the western corner at Point Barrow has always been a risky proposition... while transiting "Queen Maud" and "Bellot Strait" are 'choke-points' for either direction of travel this season.

Temperatures are declining... freeze up is right around the corner...


Pond Inlet is going to start freezing over in about a week. 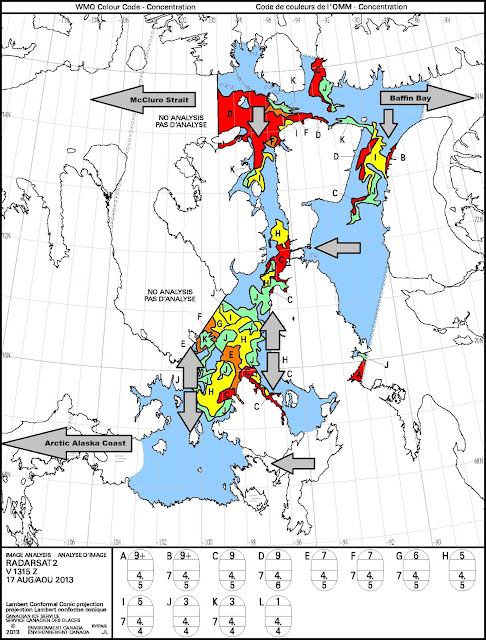 The Fall super storms are a fact of life in Alaska - its only a matter of time until weather conditions create a massive Fall super storm. This year - there is 55% more Beaufort Sea ice than in 2012. Give Mother Nature her due time and she will move billions of tons of sea ice and push it up against the Alaska Arctic Coast - effectively closing the door to exit the Arctic from western Canada. GET THE HECK OUT OF THE WESTERN ARCTIC IN THE NEAR FUTURE ELSE MAKE PLANS TO HAUL-OUT AT SOME PLACE LIKE INUVIK ELSE BE READY TO WINTER OVER IN THE ICE.

You have been warned.  No icebreakers are going to be able to offer any assistance - Mother Nature is mightier than all the icebreakers put together.

You can follow along at my blog for specifics as they develope: http://northwestpassage2013.blogspot.com/

You can also track known yachts as they attempt to navigate their way through their Northwest Passage - see: http://northwestpassage2013.blogspot.com/2013/08/northwest-passage-2013-arctic-boats.html