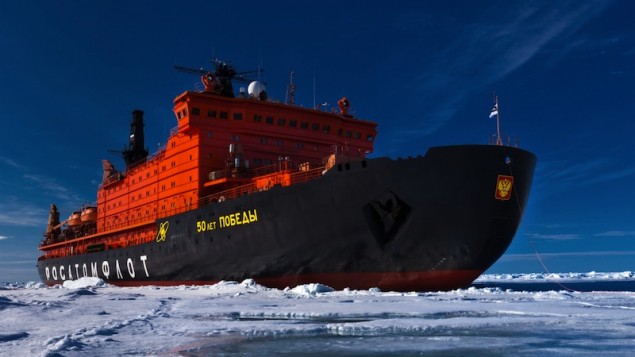 IMO Secretary-General Koji Sekimizu is preparing to depart on a 5-day fact-finding mission through the arctic that could potentially influence future regulation in the region.

Mr. Sekimizu will make the trip as a guest of the Russian government aboard the nuclear-powered icebreaker, 50 Let Pobedy, as she transits the famed Northern Sea Route linking Europe and northern Russia.
The trip comes on the heels of an increased interest within the global shipping community in utilizing the Northern Sea Route, as well as other northern passages, as Arctic sea ice recedes and the navigation season becomes longer.

During the voyage, Sekimizu will see first hand the effects of climate change on the sea ice coverage, and assess how the facilities and infrastructure needed for Arctic navigation are being developed along the Siberian coastline. The trip is also expected to provide an opportunity to discuss matters such as the logistics and supplies required to support Arctic navigation, the need for special qualifications for ships’ officers operating in the region and for the provision of adequate ice-breaking capability.

Sekimizu will use the voyage to observe and experience the inherent difficulties of Arctic navigation, such as poor weather conditions and the relative lack of reliable charts, communication systems and other navigational aids that pose challenges for mariners. The remoteness of the area makes rescue or clean-up operations difficult and costly; cold temperatures may reduce the effectiveness of numerous components of the ship, ranging from deck machinery and emergency equipment to sea suctions and, when ice is present, it can impose additional loads on the hull, propulsion system and appendages.

IMO is currently developing a draft international code of safety for ships operating in polar waters, known as the Polar Code, which would cover the full range of design, construction, equipment, operational, training, search and rescue and environmental protection matters relevant to ships operating in the inhospitable waters surrounding the two poles.

With his Russian hosts, Sekimizu will discuss broader issues related to Arctic navigation, such as the degree and nature of the responsibility borne by coastal States for the maintenance and support needed for such navigation; the implementation of the relevant provisions of the United Nations Convention on the Law of the Sea (UNCLOS) and other measures, such as the Polar Code, the potential for offshore exploration and the protection of the unique marine environment in the Arctic Ocean.

That was enjoyable to read, thanks for posting it.