During the trips Tooluka makes this season, the location will be transmitted via e-mail over shortwave-radio or satellite.

Scroll down to see Tooluka's
most recent location.
Click here for a larger map.

During the Northwest passage you can follow Tooluka thanks to a little satellite (SPOT) tracker: a device that sends a position update every 10 minutes. Click here to open the view the current position. In the left column you'll see all location. Use the 'page' buttons at the bottom to go back in time.

14-08-2013 positie: 74°34' N 090°02' W - Rigby Bay
temperatuur: 2,1 gr
watertemperatuur: 0,4 gr
wind: too much
barometer: 998->1004 hPa
mijlen totaal sinds upernavik: 725M
Another day has passed on Tooluka. Same spot, same ice situation (too much), more wind but similar activities on board. We sleep in in the mornings, enjoy a late breakfast, clean the vessel, get out books and games, bake a cake, think out a dinner menu (Govert and myself), drinks heaps of coffee and tea, play more games, good discussions and talks, study last ice- and weather information, cook, eat, drink more tea, a glass of wine and another day has flown by! Today this all happened while Tooluka heeled over regularly in the strong NW-wind. The wind generator kept the batteries filled, we hardly came outside as the chill factor was big and the inside temperature a lot nicer! All in all we're having a great time, although we hope, of course, for better conditions and less ice in the passages we need to continue our trip. But it doesn't look good. In the meantime we know of 7 more yachts, one of them a big more yacht. Us sailing yachts are all hiding here on the S shore of Devon Island, some already mentioning the possibility of not being able to get through this season and cancelling the whole attempt. We are still hopeful, but know that with the forecast of the coming days of still gale force winds from the NW, our chances are getting less. Further down the road it's partially open, so we hope that the wind is doing its job there now and we'll be able to keep going once we can move from here. It's still a long way to go, the sun has start to set at night, nights will be getting longer and winter is coming closer. We'll keep you posted, for now best regards from the good ship Tooluka, Eef

14-08-2013 positie: 74°34' N 090°02' W - Rigby bay
temperatuur: 2,5 gr
watertemperatuur: 3,0 gr
wind: kalm
barometer: 1000 hPa
mijlen totaal sinds upernavik: 725M
The first thing I heard this morning, after waking up to a flat calm, was Govert saying the neighbours had left! That got me out of my bunk in 2 seconds, to check the mail for new ice information. I received yesterday's ice chart and today's satellite image, both showing a narrow band of 3/10 in the entrance of Pr Regent Inlet, narrow in width, but wide in latitude... And a big arrow showing the movement of the ice with 20 miles per day in easterly direction! That is a lot, and means the much heavier ice further W can be in front of the inlet soon enough. What were our chances? The grib files (wind forecasts) showed a calm day for today, with an increasing NW wind from tomorrow onwards, becoming strong from tomorrow afternoon. That would put us on a lee shore, in combination with the heavy ice moving in our direction. Through 3/10 of ice our speed probably drops to less than 3 knots, making the minimum 65 miles to the inlet a long journey. And then, imagine we would get through, we would end up at Bellot Strait, knowing that it is blocked at its western side, so from that moment we would have to wait there. So although it was such a perfectly calm day, we stayed put. But with a little restless feeling, as our neighbours had left (we don;t know where to..). Anyway, as I wrote yesterday, we are in touch with most other yachts, and during the day the answers to my questions came in, and all had decided the same way as us, to stay put. The risk of trying to cross through 3/10 of ice, in what is to become a lee shore, is just too risky. Which was confirmed by the ice charts I received tonight: 8/10 of ice in front of the whole of the Pr Regent Inlet!
So we spent the day baking a nice bread, reading, playing games and talking, and the atmosphere on board is great, we're not suffering from impatience yet. Not worth taking risks, and we all agree on that.
So with the forecast as it is, we'll still be here tomorrow, so no worries when the SPOT-tracker gives an old position, we're still in the same spot. No bears yet, no musk oxen, but a good and safe anchorage! More tomorrow, Eef 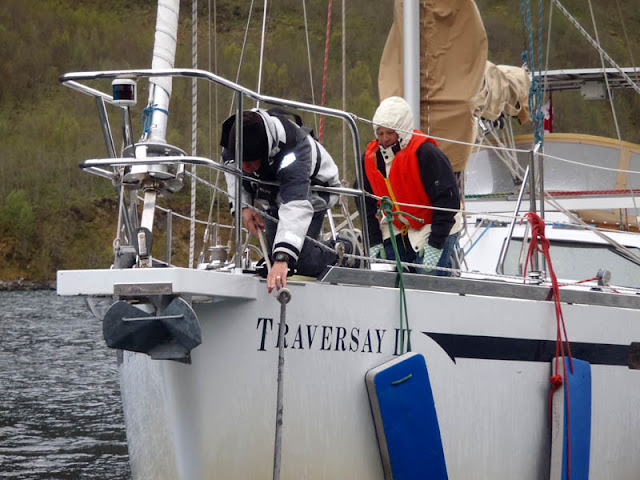 After receiving slightly improved weather and ice charts yesterday, we left Scallon Cove on Devon Island and proceeded westwards. We hoped to explore the ice at the North end of Peel Sound - one of several 'choke points' which in normal years must be cleared prior to accessing the western portion of the NWP. Last year's 'good year' allowed two boats to make their way through Parry Channel and McClure Strait, thus cutting many miles off the route. Given this year's heavy ice conditions, our hopes were much more modest. If we failed to get further west and head down into Peel, we hoped to get to Resolute and re-fill our fuel.

Unfortunately, we got turned back by ice and re-emerging wind. At 0730 we anchored back on Devon Island at Erebus and Terror Bay after passing Beechey Island in high winds and a snowstorm.

Beechey Island contains the memorial to a number of crew members from Franklin's ship who died here in the 1840s on their journey of exploration. We hope to honor their memory by a visit to their graves if more suitable weather prevails. Some years ago the remains of one of these explorers was sent back to Edmonton for testing. This furnished conclusive proof that lead poisoning was a contributing factor to the demise of these men.

We ourselves are eating well and our stores still include all food groups including not just tinned but also fresh veggies, meat and bread. Today will be another 'at home' day and we have various repairs underway. We can't repair the broken refrigerator - and with current temperatures we don't really need it. The men are now fixing a really annoying problem. An ear-splitting alarm sounds whenever water splashes up high on the side of the bilges. It's happened several times (mostly when one of us is sound asleep) because the shaft seal leaks whenever the propeller cavitates or we're in heavy waves. Claude has diagnosed the problem and Larry is currently trying to put more compression on the bellows which would stop the leak and silence this annoying alarm forever.

Good news came in from our friend Nicola on his red steel boat - 'Perd pas le Nord' - (sailing under a Belgian flag). He and his crew have surged forward to the south of Boothia Island and headed for Gjoa Haven. Nicola with his friend Alex and family (Veronique and their two pre-teen girls Emy and Elyse) are through the worst of the ice on this side. They have accomplished this miracle by crashing through REALLY thick ice - working very hard with one person high up the mast to check for possible routes, and with using their boat somewhat like an icebreaker …

We're going to continue to wait for better ice reports. We feel unable to use Traversay as an icebreaker … if the echo sounder on our hull were destroyed in really thick ice, it could let water in and we really don't need cold baths!no-footer