WHEN another vessel approaches your location you can see them approaching from maybe up to 25 nm distant. It all depends on your AIS/VHF radio antenna location - the higher, i.e. on a sailboat mast, the greater the effective signal distance.

So why wouldn't you maintain a marine "watch" system? To ensure safety from such common calamities as dragging anchor, a storm front passage, a polar bear attempting to climb aboard, drifting ice trapping your vessel and A PASSING ICE CLASS SHIP SUCH AS MV HANSEATIC OR CCGS icebreaker HENRY LARSEN.

The MV HANSEATIC crossed through Bellot Strait southbound on 20130825 for Gjoa Haven.

Not one of the yachts made an attempt to communicate or request permission to follow her at slow-bell to Gjoa Haven. Hummm? Must be happy to winter over in the Arctic... there is some 37 days at 5kts to travel before reaching a safe winter port such as Sand Point Alaska... time is of the essence! Maybe I shouldn't worry... but with many years of sea service in the Bering Sea I can guarantee you there is going to be a Fall storm of epic proportions and someone is going to pay a very dear price - yachts must get out of the Arctic ASAP. 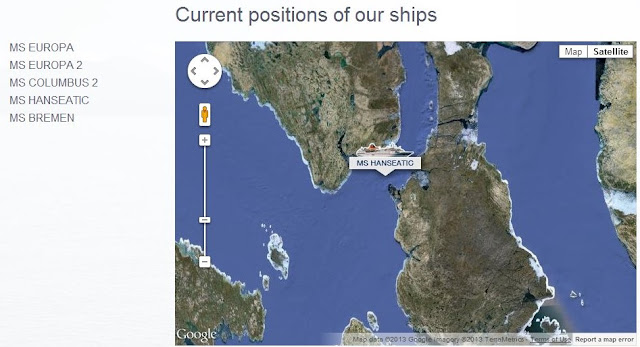 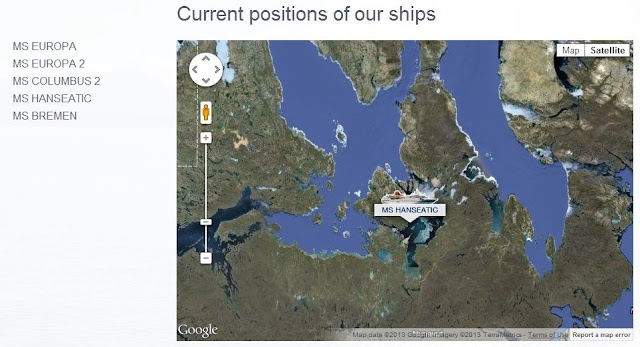 According to a map of ice NOAA 5 am, a breakthrough show west of Peel Sound.
We decided to try our luck. Other boats (Traversey III Acalèphe and two other newly arrived boats - Isiatis and Belle Epoque). Decided to await the arrival of the next ice chart Canadian 12H
Unfortunately, the inventor of the ice maze forgot inserted in his notebook the last page with the solutions - the output does not exist! - That the dense ice in the southern South Peel, without passage for us. "But this time, says Anissa (8 years), this is not a game, but a labyrinth for real!"
So here we are now on the way back to Willis Bay where we take shelter during 48 hours until the strong wind NW announced has passed.
Snowing ... The musk ox is a great way cow or yak. He is the resident arctic tundra that is Greenland, Canada and Alaska. Forty years ago, however, a herd of muskoxen in northern Siberia was seen and now live in Norway and Sweden smaller herds.
Previously, the ancestors of the extinct musk oxen were moschatus, warmer climates usual year. Only by adapting year colder places the musk ox survived. Most of muskoxen can only be up to 20 years old. But for many of them die before starving year if they have not grown enough fat reserves for the winter last year, or year or freezing drowning when they break through the ice of frozen rivers. At the moment there are in the world throughout the whole about 30,000 musk oxen, which really is not much, I think.
The natural enemies of wolves and polar bears are the musk ox.
Muskoxen prefer as habitat locations where there is little rain. Although they live in the cold, but they are sensitive to sustained moisture. Mostly they keep to the banks of rivers or in valleys and low-lying levels. Eat of birch trees or woody plants such as willows, from which they strip the leaves, and how of various herbs mosses. For protection against the cold, the muskoxen have a kind of fat and then the thick, dark brown fur that about eight times as warm as wool and as soft as cashmere. On average they weigh 300 kg and are 2.4 m long and 1.4 m high. And they have a thick mane and distinctive curved horns.
During the summer the herds are large 5a 15 musk oxen in winter they can grow up to 100 animals. In the herd, almost everything is in sync with the musk ox: The feeding and rest periods that last around two hours, all of the herd followed. Per day they lay back an average of 2 km, which is not much they move slowly aussi. The group has almost always a leader, usually an older animal. A few days ago we have seen from the boat eight on the country yesterday musk ox and six close when walking.

ARCTIC EXIT URGENCY?  YOU DECIDE BY FOLLOWING ALONG... I'M VERY WORRIED ABOUT THEIR SAFETY !!!

I'm with you on worrying. Plus their posts imply an unheated cabin or is it just a language issue? Can an ice floe get wedged between the two hulls? How much side pressure can the hulls take?

I talked with a NWP crewmember recently who related that his captain had the mind set of "wait for it to melt" Simple and sweet... while they made it without incident the crewmember thought the captain's attitude was a bit crazy after seeing how ice moves and acts on movements through the seawaters. Bottom line - great experience for the family... I hope he has buddies ready to fly in to help crew on a moments notice so the family can fly out to a safe condo to wait. WHAT IS CLEAR - SEVEN YACHTS ARE NOT WORKING TOGETHER - THERE ARE A FEW LONE WOLVES AND SEVERAL "OUTSIDERS" WHO WILL DO IT THEIR WAY NO MATTER WHAT. I'm watching with lots of interest. I'm sure the CCG and USCG are likewise watching... standing by!