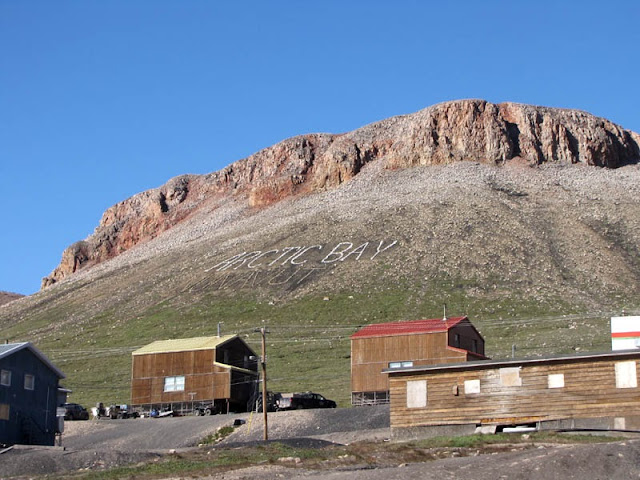 The last few miles toward Arctic Bay, we turned east off Admiralty Inlet into Adams Sound.  The leftovers from ice that only a week ago had filled the Sound required a bit of turning this way and that to avoid collisions but Arctic Bay itself was completely free of ice.

Our 5am arrival was greeted by curious looks from adults walking on the beach and by loud whistles from the many children.  Clock-time seems to have no meaning here.

After our preparing the dinghy for the trip ashore, a couple of back and forth phone calls led to the RCMP meeting us as we arrived at the beach. They drove us up to their station where the customs and immigration formalities were dealt with in a quick, efficient and friendly manner.  Almost all yachts check into Arctic Canada at Pond Inlet, Resolute Bay or (from the west) Tuktoyaktuk so we were clearly a novelty. That said, it was clear to us that the ice-free sheltered harbor would vastly ease our refueling task over other more open harbors. 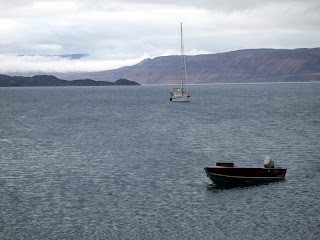 Moses, the owner of the local hotel, has the fuel concession as well so we made our way to the hotel after finishing with the RCMP.  Fueling, it turned out, could not be arranged for some hours but at the hotel we had delightful conversations with one of the nurses (from Calgary) and the hotel cook (from Ghana). This chat was accompanied with very tasty muffins right out of the oven.  We also got to see photos of the successful Narwhal hunt of the previous day.  No-one is wealthy here and, given the price of flown-in food, a successful hunt is always a bright moment for the town and speaks well of the competence of the hunters.

Ah ... but the fuel ... Claude then went on a hunt for Moses and managed to set up a 2 o'clock refueling. Claude and I busied ourselves with bringing our fuel containers to the beach and, right on the dot, the diesel truck appeared. 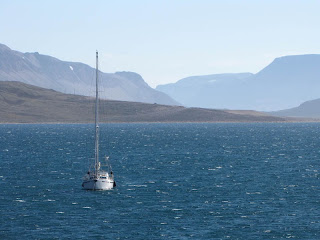 While Claude and I did a number of trips back and forth boarding a total of 440 liters - siphoning 220 of it into the on-board tanks, Mary Anne went to store in search of post cards and onions.  The onions were easy. Because of a northern subsidy on flown-in nutritious foods, fresh veggies and fruit are reasonably priced - but don't even think of buying potato chips (crisps) or chocolate bars! The post cards were another matter - the lack of tourists in this particular part of Nunavut has reduced demand - and thus supply - to zero. Of course it being a long weekend, the post office was closed anyway. 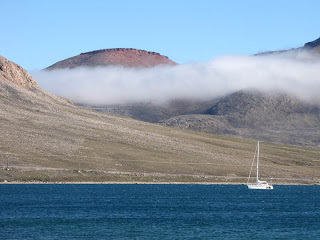 Now we sit anchored in front of the town  ...  motion-free because of the well sheltered harbor but listening to the annoying howling of the wind blowing from the north.  North is where we must go to make our way back to Parry Channel - our highway toward the west.

Now restored to our full fuel load of 900 liters, we are ready to move some more, generate more electricity and keep warm at the same time.

Perhaps tomorrow - or perhaps later - we'll try to find our way to an anchorage on the south coast of Devon Island and then ease our way west as the ice recedes.

I believe the spot is "Arctic Bay" off Admiralty Inlet ... not "Alert Bay"

Sure thing...must of been one of those 'senior moments' doing to much wile reading T&T... lol
Thanks,
Doug