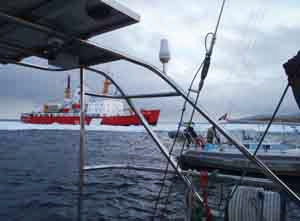 There are still many miles ahead of us before we are able to cross the Arctic Circle southbound in the Bering Strait. Nonetheless there is a defining location that decides whether you must turn around to avoid the arctic winter and return whence you came OR continue onward toward your goal. This spot may change from year to year but in 2013 it was Bellot Strait.

Heavy ice blocked the northern entrance to Peel Sound leaving Bellot Strait the only practical route into Peel Sound from the east. While the part of Regent Inlet east of Bellot Strait was largely ice-free, a shrinking but still formidable area of 9/10 ice sat off Bellot Strait's western entrance in Peel Sound. Additionally, incessant westerly winds jammed this ice into the Strait where the 5 to 9 knot tidal currents wedged it into the narrowest point.

After the amusing day applying a temporary repair to our anchor windlass, a forecast of east winds presented the possibility that the icejam would move out of the strait and off the coast.

At 11pm on August 20, another Canadian boat ACALEPHE and TRAVERSAY III retrieved anchors and headed into Bellot Strait. We felt some trepidation due to rumors of strong turbulent currents hurling unwary boats into walls of ice across the strait. It turned out not so bad but the swirling currents DID present rapidly opening and closing jaws of ice waiting to catch the inattentive sailor. We negotiated a lot of ice only to find ourselves blocked at Halfway Island which is, as you guessed, half way along the thirteen mile strait.

While we hovered out of reach of the slabs of ice drifting by in the current, Claude noted that if we waited, perhaps ALL the ice would pass us. Repeatedly we backtracked to ensure an escape route was still open and then went back to the ice barrier. At each iteration, the water behind became clearer and we advanced further and further down the strait.

We were very hopeful but as the tidal flow turned, we remained 2 1/2 miles from the exit.

During the slow return to our anchorage near Fort Ross, we resolved to do the whole thing again at the next tide after perhaps 3 hours of sleep. Alas this time the wind had shifted to the west and, surrounded by snow squalls, we only just got past Halfway Island as the turn of the tide approached. Clearly the exercise was futile!

On the 22nd there was a big west wind - obviously a no-go for the Strait. But then we needed a rest, the engine needed an oil change AND we wanted to go for a walk on the northern-most part of the North American mainland.

At this point the northern exit to Prince Regent Inlet was starting to block with ice leading many of the NWP contenders to contemplate how one would winter over at Fort Ross - a geographic location with no settlement. TOOLUKA and ARCTIC TERN - we believe - headed back north to return to Greenland [note that all this writing reflects the beliefs of the authors - who lack internet - and may not be in tune with reality].

(NWP2013 Blogger Comment: How about a NWP mariners net daily at 0700 CDT which is 2400 GMT on both VHF 68, SSB 4125/6215 or urgent traffic relayed via satcom, i.e. Iridium, Inmarsat, Fleetbroadband etc. There is a reason for posting your satcom phone number with your vessel particulars - communications! Likewise, I'd strongly suggest a daily comm with the Canadian Coast Guard. This is a great example of why.)

Anyway, a strong easterly forecast on the morning of the 23rd presented our penultimate or ultimate opportunity to get to the west. So off went ACALEPHE and TRAVERSAY III one more time in the middle of the night. Night is now becoming a factor here as August plays itself out.

This time we were blocked by ice with only half a mile to the western exit. As we pointed back east into the current with the ice wall behind us, our instruments showed us still moving west at nearly a knot. The ice blockage kept moving west as the last hours of west-going tide played themselves out. The Swiss catamaran LIBELULLE joined us in our early morning vigil. In the end, perhaps 50 meters of ice separated us from freedom. In calm waters, we would have tried to push through but in the swirling tidal currents, it would have been very dodgy.

But there was a trump card! The evening before we had discovered that the Canadian Coast Guard Icebreaker HENRY LARSEN, named for the RCMP officer who skippered the first return Northwest Passage, would be escorting a cruise liner and a super yacht through at this precise time.

After his primary duty was done, HENRY LARSEN came back and cut a short path for three tiny sailboats. It closed almost as soon as he cut it but all three of us managed to scoot through!

It was a long and busy day. Early morning. Bellot Strait Crossing. Ours. Arrival of Henry Larsen opens the few meters that block us out. Arrival in the Peel Sound.
Navigation without incident until mid-afternoon. The hours tick away to the rhythm of conversations between Traversay III via VHF etAcalèphe. Voices become familiar to us, while some of the faces are unknown.
15H: Can not continue towards Gjoa Haven! The ice surrounds us, we must go back. Long slalom through the ice floes. Follow the instructions of those who climb to the top of our mast.
17H: we want to arbiter the boat for the night in a bay unknown, but there is too much ice. The fog is more dense. Dragonfly put the throttle to go identify Bay Willis, who seem protected from the winds, tides and ice.
19H: entrance into the bay from the south, the north of the bay is blocked by ice. Wind 25 knots. It's raining hard.
22H: we collapse from fatigue. Wake planned 5 am to check the new maps. 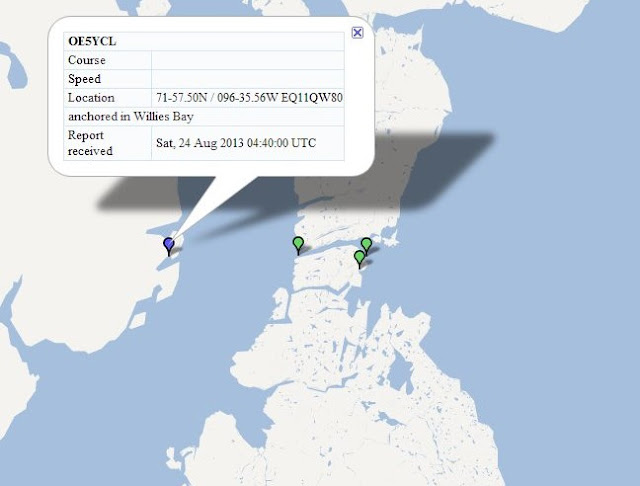 MS HANSEATIC on their company website is southbound in Prince Regeant Inlet - undoubtedly heading for Bellot Strait - see: http://www.hl-cruises.com/ships/ms-hanseatic/ship-positions/ that be the case all yachts better be on high alert to be ready to follow HANSEATIC through Bellot Straits and the western choke-points - this is likely the last opportunity before freeze-up.