22-08-2013 positie: 72°00' N 094°13' W - Depot Bay, Fort Ross
temperatuur: 0,2 gr
watertemperatuur: 0,1 gr
wind: SE 4 Bft
barometer: 1002 hPa
mijlen totaal sinds upernavik: 943M
Dear friends of us and Tooluka, the decision has been taken, we give up our attempt to get through the NW Passage and turn around. Tonight I'll write a more detailed story, we are already underway and the sails ask for attention! Best reghards from all of us, Eef

22-08-2013 positie: 72°11' N 091°47' W - Prince Regent Inlet
temperatuur: 0,2 gr
watertemperatuur: 0,1 gr
wind: SE 5-> E 3 Bft
barometer: 1002->998 hPa
koers: ENE
mijlen vandaag: 53M
mijlen totaal sinds upernavik: 996M
Time to give an explanation to our decision to give up our attempt to cross the NW Passage (NWP) this season. It's the conclusion of many thoughts, talks and considerations, both with our own team, and with our colleagues on yachts and ships around us. It's very disappointing for us and everybody who follows us from a distance, but if it was a hard decision? No, not really. The weather is variable, global warming not lineair and the time span to sail this passage in one summer is at best short. Last winter was cold and this summer has shown more N and W winds than the Easterlies that help clearing this side of the passage. Then there is a clear difference in water temperature between this year and the last years. We experience water temperatures of around zero C., whereas yachts of the past years talk about 5+. This means that ice melts slower and that it will freeze sooner, once temperatures start dropping again. This will shorten the time you are given to get through the passage.
This morning "Sea Adventurer", a 100 m cruise ship with many years of experience in the MWP, wanted to sail to the west end of the Bellot Strait, but had to turn around earlier because of 'solid ice'. SO absolutely no option for us. From tomorrow end of the afternoon a strong westerly is expected. Our last hope was that we could get through Bellot Strait today, which would give us 24 hours to get S of the thick ice before the wind would push more ice towards the coast. With that option lost, we would have to wait until well after the westerly wind for the strait to open again. Precious time would be lost. At the same time more ice from the NW would block Larsen Sound and Victoria Strait, closing our possible shortcut to Cambridge Bay. 150 miles extra via Gjoa: fun if you have time, but giving one extra stress when in a hurry.
Then the west side of the NWP: the bottleneck is Barrow Point, from Bellot Strait (via Gjoa) about 1700 miles. Then another 600 to Nome plus a minimum of 1200 to Seward, our planned wintering spot. North of Alaska there is still a lot of ice and N winds push it from the Beaufort Sea towards the shore. Add to that the longer nights, during which you may have to heave to because of ice, and it takes even more time. Temperatures will drop (now around 0 C), at less than -2C spray will cause icing: at best very hard to work in, possibly very dangerous! In other words: time to find a wintering spot! As I have to spend the winter in Holland to teach, I have to leave Tooluka behind in a safe spot. So wintering in the NWP is no option, and then the risks of gambling for the west side seem to big and we turn around. So in fact it's quite an easy decision. Do I explain it clearly?
Next question: what's next? When the decision had been taken the moment of departure came very suddenly: big ice came floating into the bay and we were in the way. The weather forecast for Prince Regent Inlet gives a favourable SE wind until tomorrow afternoon, so we left right away. From Saturday onwards a low is expected to pass S of us, bringing wind. If this is the case it will be easterly which we need, as for the time being our back door is closed. The entrance to Prince Regent Inlet has a wide yellow band, meaning 4/10 to 6/10 of ice. Too much for us, especially in combination with some wind and seaway, but hopefully this easterly will free a corridor along the coast, through which we can escape! The Lancaster Sound lies open for us and we'll hope for another wind direction! We don't have any definite plans yet for that point, Arctic Bay sounds like fun, maybe Pond Inlet and after that it's still a big question mark. We can follow the Baffin Island coast or cross to Greenland. We can return to Aasiaat and winter there or continue south to New Foundland and find a spot there (Arctic Tern is just like us on their way N and knows the way there). No idea yet. The beautiful thing with a sailing vessel is that you have the world at your feet! We plan on enjoying that for the time to come and little by little a plan will crystallize. We'll keep you posted. So far for now, warm regards from Tooluka, from all 6 of us, Eef

Did they retreat or was there hope from a Canadian icebreaker just across the Bellot Straits?... more details are in the blog.... or check TOOLUKA's blog at: 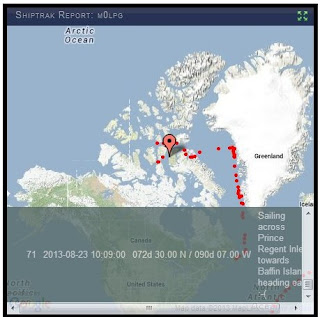 I must say that over and over again I urged the seven yachts to work together in a cooperative manner - reconning the strait and making communications with Canada Ice Service aircraft overhead and had they maintained a radio schedule with the Canadian Coast Guard they all would of know that the CCGS icebreaker Henry Larsen was approaching with an ETA and would of been ready to make the complete Bellot Straits transit through the westside heavy ice.... OMH!!!

Some lessons are learned the hard way... and when you know a bit more you know that the skippers on these two boats were a 100T licensed mariner and a university professor... very independent profession types.

Smooth seas to your wintering port.

We're doing ok here. Had a dodgy day yesterday where it all looked terminal for the trip with bad weather and ice reports and moral a bit low. We've got a much more positive outlook today after sailing up and looking at the Bellot Straight and getting some new info on weather and ice along the Alaskan side which seems a bit better. Fingers crossed for a safe passage through in the next couple of days and then on our way again. If not then time is ticking.
This was sounding promising then Chalky managed to get another mail to me later last night. With a very sad heart I've pasted it below:
Hi Love,
Bad news from Canada I'm afraid. Its crunch time and we've had to turn back and head out of the passage. Decision made about half an hour ago and we're now heading back out from Bellot across to the eastern side of Regent to head back towards Baffin eventually. Really sad but the ice hasn't moved from Franklin Straight and Bellot is impassable and Peel hasn't opened at the top all season. Sea temperatures 4 degrees lower than usual at this time (only -1C). It seems like we chose a really bad year for ice. That with the 45 knot Winds forecast have forced us to make the decision and head for cover. Its a real downer as we've a long way to sail now without the expedition side of it just knowing that we didnt make it.
I guess we'll be going via Pond on the way back so I'll try and get some comms with you there.
Love you loads and sorry :-(
xxxxxxxxxx
I am absolutely gutted for them. It just goes to show what a dangerous expedition this has always been and such decisions are not taken lightly. Getting home in one piece must be their primary objective. Still, I just want to hold Chalky in my arms and not let him go and to end his mail with sorry?! Like he's let us down?! I don't think so Chalky! I've never been prouder or fonder of him and on the plus side we should get to see each other again sooner rather than later. I'm just going to have to make him do this all over again and write a 'Chalky Sails the Northwest Passage - Again' blog. Also, he has a valid US visa for a year, guess we should make good use of that.
Sadness aside, here's the ice charts. The first one being the southern aspect of Somerset Island showing Bellot Strait and the second one showing the northern aspect and (exit through) Prince Regent Inlet:

[22:08:2013 - Approaches to Resolute, Prince Regent Inlet looking impassable to me]
This second image concerns me. The ice conditions on the northeast aspect of Prince Regent Inlet is yellow which is 40 - 60% ice coverage. I believe they can sail through up to 30% coverage so this tells me that their exit is also impassable. Of course I don't have weather charts to track and can only hope that the predicted 45 knots coming their way will blow some ice aside to let them through. Things have turned from 'are they going to make it through?' to 'are they going to be able to make it back?'. My heart is out there with the Molpigs, I just hope Chalky catches it.
I've not bothered with the map of their location as it's not really changed much from the last one but here's the link to the aprs map if you want to look yourself:http://aprs.fi/#!call=a%2FM0LPG&timerange=604800&tail=604800 and here's the Shiptrak link showing pretty much the same: http://www.shiptrak.org/?callsign=m0lpg&filter=30
All the luck in the world to Arctic Tern and her Molpigs