Posted on August 31, 2013by stevengoddard
It turns out that climate is cyclical, not linear, and does not correlate with CO2.

Our ice router Victor has been very clear in what lies ahead. He writes, “Just to give you the danger of ice situation at the eastern Arctic, Eef Willems of “Tooluka” (NED) pulled out of the game and returning to Greenland. At many Eastern places of NWP locals have not seen this type ice conditions. Residents of Resolute say 20 years have not seen anything like. Its, ice, ice and more ice. Larsen, Peel, Bellot, Regent and Barrow Strait are all choked. That is the only route to East. Already West Lancaster received -2C temperature expecting -7C on Tuesday with the snow.”
Richard Weber, my teammate to the South Pole in 2009 and without doubt the most accomplished polar skier alive today, is owner and operator of Arctic Watch on Cunningham Inlet at the northern end of Somerset Island. Arctic Watch faces out onto our proposed eastern route. Richard dropped me a note the other day advising: “This has been the coldest season with the most ice since we started Arctic Watch in 2000. Almost no whales. The NWPassage is still blocked with ice. Some of the bays still have not melted!”
We row into Cambridge Bay, the official conclusion of our Mainstream Last First expedition – MainStream Last First

Chewer says:
August 31, 2013 at 5:47 am
Team Twisted received a severe spanking, but their documentary will show it to be a total success.
I can’t wait till they make an attempt again next year-:)

Jack Savage says:
August 31, 2013 at 8:17 am
The lesson I am taking away from this is that some (most? me too? ) people, even if you beat them over the head with evidence that their belief might be erroneous, continue to believe nevertheless. The Arctic must be warm because the scientists and the Inuit say so. I expect that they will be coming back to try again next year? Some how I think their “belief” will not extend to that.
I wonder if their experience will have had a chilling effect on expeditions being planned for next year.
Maybe next year the heat will emerge from the oceans as Joule-zilla.

Edmonon Al says:
August 31, 2013 at 10:58 am
Andy and Stephen are correct in their assessments.
These buffoons will probably go back to Vancouver; get a Government grant and mount the piece of junk…….sorry…… the Arctic Joule, on a pedestal, with a big plaque that boasts of their great feat of “bringing awareness to the pressing issues of climate change in the arctic.” 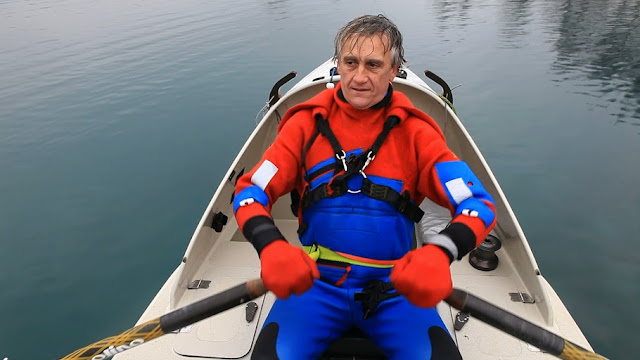 AND LETS NOT FORGET WHO IS CRAZY TO CONTINUE ROWING SOLO FROM TUKTOYAKTUK TO CAMBRIDGE IN SEPTEMBER IS CHARLES HEDRICH.
http://charleshedrich-nordouest.blogspot.fr/2013/08/290813-position-rameur-des-glaces.html 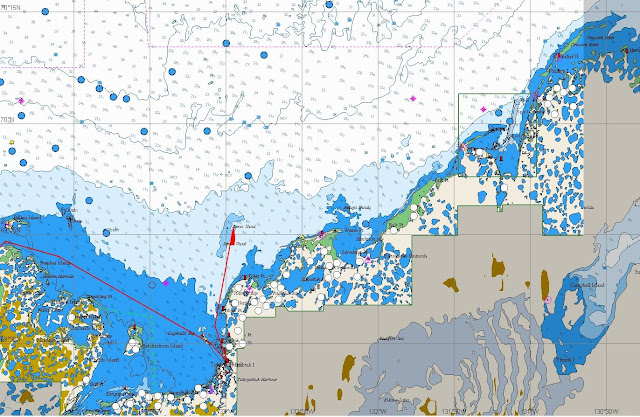 Interesting summer for sure. last time I did the NWP we were in company with the 46m M/Y Dione Sky (I was ice pilot on 49m M/Y T6). We lagged behind Dione Sky at Beechey Is for a day to explore a bit with our B3 A Star. They just squeaked ahead of a large chunk of ice coming down just west of Byam Martin and completely blocking the way west. We were forced to head down Franklin Strait, a longer and darker route in mid August. They managed to be the first vessel in recent times to navigate down Prince of Wales Strait (between Banks Is and Victoria Is)in ice free conditions. That was the first time I have seen that strait completely ice free in the 14 years I have sailed the Arctic as pilot. I read somewhere someone else did it last year claiming to be 'first'. Just a tid bit I thought you may find interesting. There was once a CCG guy called Mac Donald who used to log all transits, I have not seen an update in quite a few years now. Anyway this year is different again. To travel in the Arctic is to wait, this year looks like it will clear in September but you never know. Capt. Phil

I read this year's ice conditions are interesting. I have been ice pilot in the arctic for 14 years and am always amazed at what sailors try and accomplish. Just an interesting tib bit: during my transit in 2010 on 49m M/Y 'T6' we were in company with 46m M/Y 'Dione Sky'(previously Turmoil - transit 2001). They were a day ahead of us at beechey Is, we stayed to fly and explore in our B3 Astar. They managed to squeak ahead of a large piece of ice extending down to the west of Byam Martin Is. We missed the window and had to take the longer and darker route down Franklin Strait (it was now min Aug). They were the first in modern times to transit Prince of Wales Strait between Banks Is and Victoria Is. I read somewhere a guy did it last year claiming to be the 'first' but I only blame that on poor recording. There was a CCG fellow named McDonald based in Sarnia who used to record all transits but ceased doing so a while ago. Interesting times for sure. Rgds, Phil.