2013 in the Arctic turns out to have many surprises - Next, Swim relay to cross Bering Strait between USA and Russia 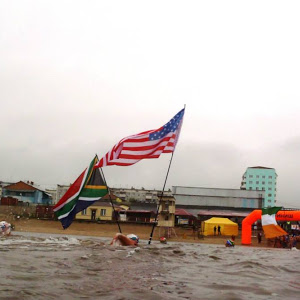 The different teams swam with their country flags on a pole for 400m during the demonstration of their flags in Yakutsk. "It was very, very long," said the South African team. Here the SA and USA flags.


Swim relay to cross Bering Strait between USA and Russia

Clad in nothing but their Speedos, a group of international swimmers plan to cross the Bering Strait in a swim relay in August. The relay will start on August 3, 2013 at Cape Dezhnev in Chukotka, Russia and is scheduled to be completed at Cape Prince of Wales in Alaska by the August 6.

Organizers say the scientific purposes of this expedition are to develop a technique for restoring and conditioning the human body through training in cold water and recovery of a human being after long exposure to the cold water.

The swimmers plan to install memorial plates on the Russian and U.S. shore sides of the Bering Strait.

According to a press release from the organizers, meetings with ocal residents are planned in Wales for August 6 and in Nome on August 7 or 8th. 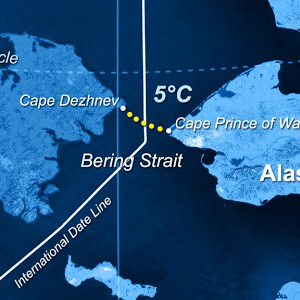 Eastern Military District Command of the Russian Federation and the Russian Association of Polar Explorers are supporting this expedition.

Participants will not have special equipment and are permitted to use only a regular textile swimsuit, swim cap and goggles in accordance with the “traditional rules” of open water and marathon swimming.