The legendary Arctic Northwest Passage has become blocked with 5/10 concentrated drifting sea ice at both the eastern and at the western ends of ’s . 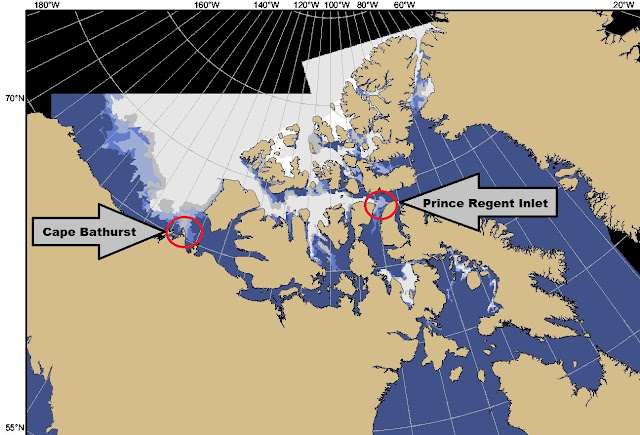 Prince Regent Inlet in position 73.7880535N, -89.2529297W became blocked on 20130827 with 5/10 ice concentration with 7/10 ice pushing. This effectively closes the 2013 without Canadian Coast Guard icebreaker escorts for transit. Currently there is a commercial cruise ship on a west to east passage which will reach Prince Regent Inlet in another day. It is unknown if there is a CCG icebreaker in the area to provide assistance since government ships do not provide Automatic Identification Service (AIS) to public AIS websites. Since one of the Canadian Coast Guard’s prime missions is to provide icebreaking for commercial shipping it will be interesting to see if they view this opportunity for good public relations to help recreational yachts transiting the .

There are a number of yachts known to be in the area heading west: ACALEPHE (CA), ISATIS (), LA BELLE EPOQUE (DE), LIBELLULE (CHE), NOEME (FRA), and TRAVERSAY III (CA).  PAS PERDU LE NORD (DE) was ahead by 10 days and has already gone on to Arctic Alaska waters. While BALTHAZAR (CA) departed from Inuvik a month ago and is now on the hard in .

Several updates on known others: LE MANGUIER (FRA) is wintering over in the ice at Paulatuk. Motor Yacht Lady M II ( ) was escorted by CCGS icebreaker HENRY LARSEN through eastbound on 20130824. ARCTIC TERN (GBR) and TOOLUKA (NED) retreated to the east towards Greenland/Newfoundland away from Bellot Strait on 20130822 with the opinion that the Arctic ice was finished melting and freeze-up would prevent them from reaching the Northwest Passage finish line at the Arctic Circle in the Bering Strait.

So now the real question is if and when the Canadian Coast Guard decides to take early action to help the above yachts exit the before freeze-up or will they wait until it becomes an emergency rescue operation? Lemons turned to public relations good will is the obvious choice – what do you think they will do? 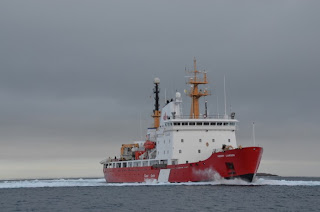 Doesn't seem to be Canadian Coast Guard icebreakers in the western archipelago but undoubtedly they can move one or more of the Franklin Expedition searching vessel westward. Is a Government agency smart enough to make early preparations? RED TAPE says NOT but you never know - with the world learning of the situation - Canada allowed the yachts to enter the Arctic and undoubtedly have a responsibility to ensure their safety and help them make their transit out of the country (to Alaska) but will it be timely and gracious? I'm staying tuned to see what happens and will vote my vote in the future according to how Canada acts toward responsible environmental actions - including the marine industry and recreational boaters.

Doug, firstly, thanks for your great blog.

> So now the real question is if and when the Canadian Coast Guard decides to take early action to help the above yachts exit the Arctic before freeze-up or will they wait until it becomes an emergency rescue operation?

Are any of these yachts in danger? Yes, yachts now between Prince Regent Inlet and Cape Bathurst are likely to have to winter in Arctic Canada. That may not be convenient, but hardly seems a reason to call out the Coast Guard. Anyone with the skills required to take a yacht to northern Canada would be well aware that a NW Passage attempt could require wintering over.

With respect to Anonymous's comment above, I disagree that Canada "allowed" all these yachts to enter the Arctic--until a yacht entering northern Canada has gone to a settlement and checked in with the RCMP (who handle Customs clearance there), they haven't been allowed into Canada.

Hello Richard, As you might suspect I keep track of Canadian icebreakers using AIS and know there are five (5) in the Eastern Arctic - currently none in the Western Arctic on my scope. I think the Coast Guard is taking a wait and see approach before re-positioning assets from the Franklin Expedition search to the western Arctic - the forecast for C. Cathurst ice is an agonizing 1 nm/day northward drift movement. I think 2/10 is open enough to make an attempt but without being on-scene its a hard call - GG would be up to it but a 10m FRP? Push or wait? Skippers call. What I do know is ever day you loose waiting you will pay a dear price in Alaska be it turning Point Barrow or south with only Nome Harbor (or Port Clarence, I remember your NWP stop) then the run to get through Unimak Pass to the east for Sand Point or further... to much open waters with big storms is likely to produce some major troubles. Godspeed them all and their good crews!

Yes, attempting to pass Cape Bathurst now definitely requires a strong hull (and a stock 10m FRP hull doesn't sound strong). And as you point out, the north is not forgiving to travelers late in the season, so it must be a difficult decision whether or not to attempt getting west of Cape Bathurst now (or in the next few days).

Somewhat off topic, but may I ask, from your years of experience running boats in Alaska, what you think of sailing direct to Hawaii from Unimak Pass at the end of September or early October?

I know of several NWP sailboats that have done it BUT I also know that without a weather window to get well to the south I think you risk major storm weather - take a look at the Pacific big picture for today at http://www.opc.ncep.noaa.gov/P_sfc_full_ocean.jpg

It looks optimum to try it but only the skipper knows his sailboat and crew... is the boat and crew up to it?

What say you - would you take ISSUMA from Nome today and sail for Hawaii looking at the above weather?

What I think is all you whiners out there should take a good look at the weather before you enter the Canadian arctic, simple as that. I read that the ice conditions are described as alarming, this cannot be farther from the truth, this is a normal ice year. I am a Canadian tax payer and I see no reason to support your silly transit through these waters. Do you have any idea what it costs the tax payer to run an icebreaker, let alone run the risk of escorting some sailboat through ice invested waters.... All it would take is one chunk of ice the size of a toaster oven to pierce the hull of a sail boat and then there would be a law suit, I say leaving you there until next year is the best course of action. Obviously those who are stuck are not mariners.

I hadn't thought about going direct from Nome, but I suppose if the forecast was good when approaching the Aleutians there'd be no need to stop in Dutch Harbor. Today, looking just at that surface analysis, the weather looks good to me for either:
* leaving Nome (planning to anchor behind an island when the low to the west brings southerlies or if it deepens and brings strong gales)
* leaving Dutch Harbor for a pass and south

But, looking at the 24, 48 & 96hour charts for the North Pacific:
* I'd prefer to wait until after the low to the west of the Bering Sea goes past and gives northerlies for going from Nome -> Dutch Harbor, because there won't be much in the way of favorable winds until then (and beating to windward in shallow waters with a probably-steep chop seems a lot of effort for little gain)
* Going from Dutch Harbor to a pass and south would seem ok (but no better than ok), with two days of favorable or light winds and a southerly gale--no storms, no Hurricane Force wind warnings.

I recalled the winds as generally being considerably stronger in late Sept and early October, but I've only been thru there once.

Anonymous Canadian - question: What are Canadian icebreakers doing in the high arctic? They are running around on undoubtedly some military operation - not shipping or recreation boat escorts. Two are spending your money searching for the 1845 Franklin Expedition...lol Harper's Arctic promises are hollow - he must take lessons from Obama - we need leaders who work for their Citizens, not the special interest groups.

I know exactly what the ice breakers do in the North and that is to facilitate safe passage for commercial vessels who resupply communities with fuel and cargo for it citizens to survive. . I also know that these ice breaker are not up there to fulfill the dreams of sailors to complete the NWP. I would be very interested in knowing your sources on the daily activities and programs of the Canadian Coast Guard, because I heard there is only one ship on the Franklin expedition.

The Coast Guard be it Canadian or USA is to SERVE anyone they can - mariners, hamlets, hunters, hikers, aircraft and the list goes on and on... so just because you are stuck on the beach... don't hold it against anyone else who is able to get out-of-doors to challenge their dreams by sailing the Northwest Passage... the Coast Guard is not going to say no if you need emergency help. Thank you Coast Guards for all you do!

Take lessons from Obama....Please. Too funny.

Which of these could Harper learn from?

Using IRS as a political weapon?
Spying on the Associated Press?
Hacking CBS reporter's computer?
Not protecting the American diplomats in Benghazi?
Covering up the Benghazi fiasco by imprisoning a videographer who had nothing to do with the situation?
Suggesting the a reporter is a criminal for things he reported, and then monitoring his phone an email?
Appointing a tax fraudster to Treasurer?
Allowing weapons to walk across the border and into the hands of Mexican ddrug dealers?
Solyndra?
Most transparent administration ever using email aliases to cover up their correspondence?
Attacking Libya without congressional approval?

The object is to reduce corruption, not increase it.

Tell you what though, I'll let my vehicle idle for a while today to help you out with your attempt to get through that iced in NWP.
Don't you hate it when mother nature does not cooperate with all those climate change models?

That was an awesome reply anonymous I agree with you one hundred percent
Obama is a shady character.