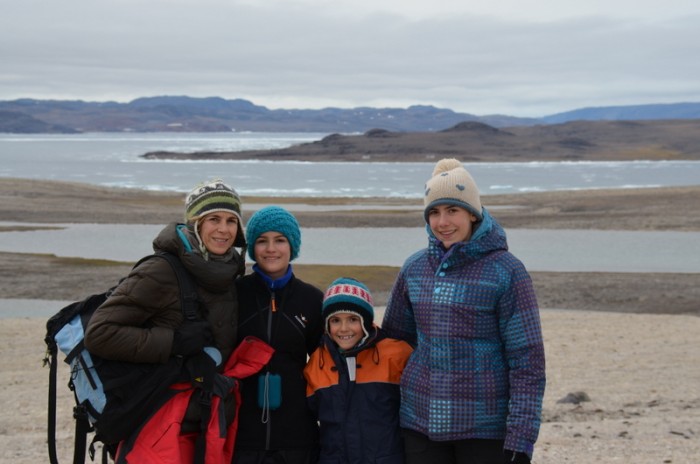 After 30H navigation, we have arrived at the entrance of Bellot Strait. New expectation. Only in the Hazard Inlet.

Should we stay or should we go, come on and let me know!
http://www.sailblogs.com/member/libellule/?xjMsgID=284590 Tooluka, Arctic Tern and Libellule waiting at Levesque Harbor, just off the eastern end of Bellot Strait. The ice flow in the middle ended up chasing us away from our anchorage. But then we boarded the floe to take some Xmas pictures on top of it, which was real fun.

The ice conditions are still very bad in Bellot Strait. So much so that all the seven sailing boats waiting on this side of the Strait are discussing whether to abandon the whole NW Passage project. The problem is that even if the Strait becomes passable in a week or two, the winter may start early in which case the boats would not make it around Alaska anymore since the ice there is still very close to shore. So the decision is either to turn around and head back down to Newfoundland, or to continue but risk being closed in by ice somewhere around Tuktoyaktuk or Northern Alaska and having to spend the winter in the Arctic. We'll probably need to take the decision this weekend...

Yes, the ice is tight along the Arctic Alaska coast but more important is to watch the polar weather systems - wind moves ice!

Uwe from Germany offers comparisons between the last three years for Queen Maud ice charts - Thanks.

While its obvious that Bellot Strait is a choke-point in 2013 it is also important to remember that the ice in just the past day has been changed from 9+ down to 5/10 which tells me there is still melting albedo energy in effect - also remember this sensing is done from satellite and/or aircraft flyover including human observation - its not perfect so a 5/10 could just as likely be 3/10 in this strong tidal area so lets add the Strait's strong flushing tidal currents and you have optimum opportunity for further ice reduction to make the transit in the next week. You should be reconing the Strait in your skiff and making detailed plans - just think of it - seven boat are there - what a big opportunity to use the power of the group.

If you are still at Bellot Strait in the first week of September - you have missed the NWP bus... I'd know and have planned several alternatives and get underway out of the Arctic.

While Uwe has a good point - remember it is August 21st - there is still time to transit Bellot Strait and turn the corner at Point Barrow before freeze up. 2013 is a late melt season - maybe one of the latest in the last 10 plus years... which means nothing is going to be black and white easy... it will require planning and organization - then a will to stick with the plan. Sure I know I'm sitting here ashore and I'm not in your shoes but I would not be encouraging you and your family unless I was willing to change places and put my recommendations on the line with you.


I am a professional mariner with 29+ years of sea service... a salty dog - lol - much of it in Alaska - I know and respect Alaska and will tell you that Point Barrow can be up and down like a show curtain but I would not run away just because of what is possible - lets deal in realities - stay focused on what is in front of you - Bellot Strait - then power west to Cambridge Bay, Tuktoy, Hershel Island, Barter Island, Prudoe Bay, Elson Lagoon then Point Barrow to Nome and on to Sand Point? Maybe more important - do you know your boat? Is it well maintained? Can you take it to weather confidently because Alaska is going to be your challenge. Your crew will be put to the test... its not IF but WHEN the weather comes calling. Pick your weather windows carefully by observing the weather approaching from Adak Alaska and from Russia.

K.I.S.S. - so lets take a back of the napkin quick-look analysis...

BOTTOM LINE IS ABOUT A MONTH - YOU NEED TO MAKE A DECISION THIS COMING WEEK - UP ANCHOR BY THE END OF AUGUST.

Reality check: (You are not wintering over in Nome - no facilities to haulout boats - so plan to resupply and sail south before the harbor ices over.)

Hello October - Are you prepared for sailing in the Fall in the Bering Sea?

Do you even know what I'm talking about?  Check weather archives and batten down your hatches.

Alaska and the Bering Sea is where the harsh reality of the North Pacific weather will come calling. You need experienced and seasoned crew for this passage.

You hit it square on the head. Recon the Strait with all seven captains. Experienced ice masters need to step forward. Before saying 'NO' I'd recon it again and set a drop dead date based upon advise from the Jetskiers or POLAR BOUND when they reach Bellot Strait. You have come this far - continue to wait it out - ice is going to melt in the strong current channel - then be prepared to navigate around the mid-channel shoal rock through Bellot Strait. Keep going after resupply in Cambridge Bay - check weather at Tuktoy or Herschel for a weather window to round Point Barrow for Nome in a prudent manner. You will once again be challenged in the Bering Sea - knowing that make sure you have rested crew for storm weather navigations. Remember to prepare for PORT CLARENCE as an alternative harbor of refuge while approaching Nome. Questions? Ask now!

I'd sail with you to hell and back... you definitely have the 'right stuff'. KUDOS!!!

Don't forget the PM on the main, genset and stuffing box in Herschel Island before making a run for it - the Arctic and Bering Sea are no place to be changing oil and fuel filters... lol Boy Nome harbor is going to look real nice! "Welcome to Nome"